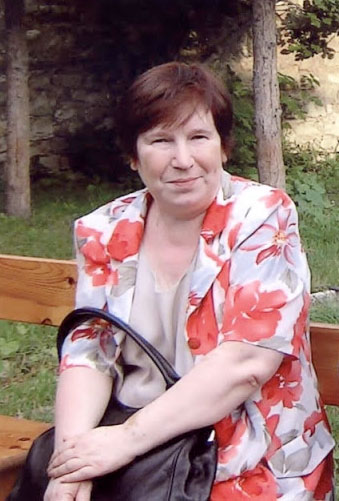 A proactive leader with vision and capacity to inspire and promote change in the work of libraries in Bulgaria and internationally, she was very effective and for 30 years worked completely on voluntary basis, leading the Bulgarian Library and Information Association and the Foundation “Global Libraries Bulgaria”. Her whole life was dedicated to the libraries and their public role in Bulgaria.  She was also a long-time and respected Director of the Information Resource Center at the US Embassy in Bulgaria.

On December 26, 2019, we suddenly and unexpectedly lost one of the leaders in the field of librarianship and information in our country - Snejana Ianeva, a long-time President of the Bulgarian Library and Information Association. Her untimely death interrupted her great work not only as a skilful and inspiring leader of the association, who has been working entirely on voluntary basis, but also as an accomplished and effective Chairman of the Global Libraries - Bulgaria Foundation and as a long-time and a respected Director of the Information Resource Center at the US Embassy in Bulgaria.

For more than 30 years, Ms. Ianeva has been instrumental in the modernization and development of libraries as a pillar of the democratic transition in Bulgaria. She worked tirelessly in all her free time for this patriotic mission. Like other notable personalities in Bulgarian history and culture, she graciously devoted to the Bulgarian people without any compensation her extensive knowledge, leadership skills, insight into innovations and her ability to clearly see the present and future role of libraries in the life of every Bulgarian - from children to the oldest.

Snejana Ianeva was born on March 8, 1952, The International Women's Day. She grew up in Dimitrovgrad in a loving and closely-knit family of intellectuals, good and caring parents, people of high morals and ethics, who raised and educated their children. Her father was a well-known attorney and a public figure, and her mother was a long-time court administrator. Snejana grew up among the books in her family's large library and began reading at the age of four. Since early childhood the love of books and knowledge formed her as a person opened to the world. Raised in a family which cherished Bulgarian traditions of literature and patriotism, she continued those traditions and dedicated all her life to the development and the prestige of Bulgarian culture in our country and around the world.

Senjana was an excellent student in the primary school and junior high school in her hometown. In 1971, she graduated with honours from the English Language School in Plovdiv, Bulgaria. Her classmates remember her as the soul of the company, witty, cheerful and full of energy, curious, combative, persistent and benevolent.

Between 1971 to 1975 she was a student at Sofia University “St. Kliment Ohridski”, the best in Bulgaria. Snejana successfully completed two degrees - English Language and Literature and Bibliography and Library Science. The second degree determined her professional path. She started working at the Periodicals Department of the University Library in the late 70's, where she participated in the introduction of information technology in librarianship. At 1984 she became the head of the department.

The fall of the Berlin Wall opened a door to the world for her. During her time in Berlin she witnessed this event of great significance for millions of people. After 1989, she won a number of competitions for specializations abroad, learned from the best in the field and quickly grew as an outstanding specialist familiar with library practices in the United States and a number of European countries.

In 1992, after winning a competition, she started working at the US Embassy in Sofia and soon became Director of the Information Resource Center. For nearly 27 years she worked successfully to develop a new type of relationship of mutual understanding, friendship and respect between the Bulgarian and American people and the civil societies in both countries. Her numerous awards and honours from the US Embassy in Sofia and the State Department, from non-governmental organizations around the world and in Bulgaria, testify to her high professionalism and dedication.

The entire career of “Snejeto”, as we all called her was dedicated to the idea of ​​working for the development and transformation of libraries into modern centres of knowledge, lifelong learning, information and culture. Knowing in detail the American and international library practices, she was deeply convinced that successful results come from motivation and with the continuous improvement of personal qualifications and the application of technology.

Thanks to her, over 40 Bulgarian librarians visited American libraries, exchanged experiences and participated in the annual conferences of the American Library Association (ALA). It was these people who became the main driver of change and transformation in our libraries during the democratic transition.

She initiated and led the participation of Bulgarian Libraries in the initiative “American Corners”.14 such centers were created at different libraries in our country and were very well received by the Bulgarian communities.

She initiated and was at the hearth of the close contacts with The Bill and Melinda Gates Foundation. She invited its representatives to visit our country and that was followed by the creation of the project "Global Libraries - Bulgaria". At the end of 2004, Carol Erickson, a senior program expert at the Bill & Melinda Gates Foundation, visited Bulgaria at her invitation and presented the Global Libraries program to the Section of Librarians Specializing in the United States.

Martha Cho - Director of the Global Libraries Program at the Bill & Melinda Gates Foundation, together with Siri Oswald from the Foundation's team and Jonathan Phaser, an independent expert consultant, held meetings with representatives of regional and town libraries and the Bulgarian Library and Information Association Board (BBIA) to discuss the possibilities for the implementation of the global initiative in Bulgaria. Through this largest project in the last 30 years, our public libraries have changed significantly and became centers for equal access to information by all citizens. Snejana Ianeva participated in the governing bodies of the Global Libraries - Bulgaria Foundation, established in 2013. Since 2016, she has been the Chairman of the Board of Trustees of the Foundation.

Her contributions stand out in many other areas - the participation of Bulgarian libraries in the international campaign "Make Your library Green", in the introduction of the latest technologies such as 3D printers, robotic toys for fun programming for children, borrowing of e-books in the American centers et al.

She contributed with her contacts to the participation of the Bulgarian College in the IFLA Committees and the Board of Directors of European Bureau of Library Information and Documentation Associations (EBLIDA). Thanks to her efforts, BBIA has increased its authority internationally and established lasting contacts with ALA, the LIBER Association, the National Commission for UNESCO and many others. On her initiative, Sofia hosted the meeting of the Board of EBLIDA in February 2018. At this meeting, a joint declaration of the Board of EBLI-DA and BBIA was adopted in connection with the draft EU Directive on copyright in the digital single market, which became known as the Sofia Declaration.

As the President of the BBIA, she affirmed the prestige of the profession of librarians and fought for the recognition librarians, something they do not always receive.  She initiatite numerous proposals for awarding leading libraries and the best library specialists with the Hristo G. Danov Award and the awards of the Ministry of Culture. She devoted much effort to advocacy and interaction with the Parliament and the Government to improve national library policies, the regulatory framework and funding mechanisms. Her belief in the importance of libraries was based on a broad knowledge of their historical role in world culture and in Bulgarian history. She had an in-dept understanding of the new functions and needs of libraries in our digital world. It was these believes that guided her in her purposeful actions for the benefit of libraries and the library profession! Librarians from all over the country supported her in her noble work.

Sneja was a very good-hearted and approachable person. She always paid attention to the problems of her colleagues and acted to solve them. She communicated with the same respect and ease with international and national leaders, as well as with librarians from small and large libraries in Bulgaria, who turned to her for advice and help. She never made empty promises and she always kept her word. With her personal example, Snejana Ianeva taught us all to serve causes that benefit many people, not just our personal interests. A deep bow to the accomplishments and bright memory of Snejana Ianeva, a remarkable woman, a professional with international prestige, a noble person  and a guardian of knowledge and literature. She will remain forever in our thoughts and hearts!

“Snejana was a role model for all of us with her highly developed sense of honesty, justice and her energy and professional dignity. She never compromised the professional standards in our work. As the President of BBIA she defended the authority of our profession and the libraries, fought for the recognition, which we always lack.

She devoted a huge effort to advocacy and interaction with the legislature and the executive branch of government. Her belief in the significance of libraries for the development of our society guided her in her hard and devoted work for the benefit of the libraries and the library profession!

Snejana has left a bright and a unique mark in the development of BBIA and she will remain forever in our thoughts and hearts.”